A popular public commentator, Farooq Kperogi, on Friday said he can ‘bet his bottom dollar’ that National Leader of the All Progressives Congress (APC), Bola Tinubu, has been disqualified from the party’s presidential primary election holding next week in Abuja.

POLITICS NIGERIA reports that banking on a statement earlier today by John Oyegun, the Chairman of the Screening Committee of the ruling party, Kperogi concluded that “the implosion of the APC has just officially started”.

Recall that this newspaper had reported that 10 aspirants were disqualified by the Oyegun-led Committee. Those cleared for the APC Convention were said to be ‘youthful aspirants’. The development has caused tension in Tinubu’s camp, as the former Lagos State Governor is 70 years old. 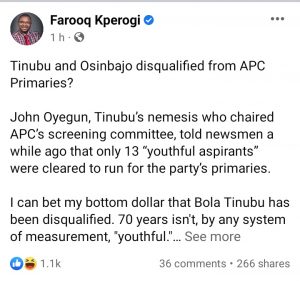 “John Oyegun, Tinubu’s nemesis who chaired APC’s screening committee, told newsmen a while ago that only 13 “youthful aspirants” were cleared to run for the party’s primaries.

“I can bet my bottom dollar that Bola Tinubu has been disqualified. 70 years isn’t, by any system of measurement, “youthful.”

“At 65, which is just 5 years younger than Tinubu, Yemi Osinbajo isn’t “youthful,” either.

“The implosion of APC has just officially started!”