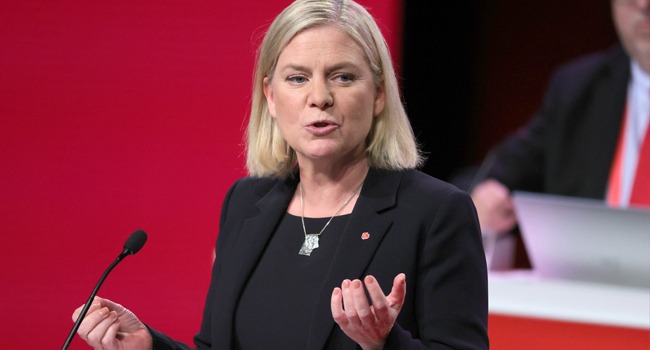 Sweden’s parliament on Monday elected Magdalena Andersson as the country’s prime minister, the first woman to hold the post, five days after her first bid lasted only hours. Despite being a nation that has long championed gender equality, Sweden has never before had a woman as prime minister.

Last week Andersson was elected by parliament but she had to resign just hours later — before she even had a chance to formally take office — after the Green Party quit her coalition government.

The 54-year-old, who is the outgoing finance minister, will now head a minority government made up solely of the Social Democrats, with 10 months to go before the September general elections.

She is due to formally take over the post on Tuesday, succeeding outgoing Prime Minister Stefan Lofven after his seven years in power.

A total of 101 members of parliament voted for Andersson, while 75 abstained and 173 voted against.

Under Sweden’s system, a prime ministerial candidate does not need the support of a majority in parliament, they just need to avoid a majority voting against them.