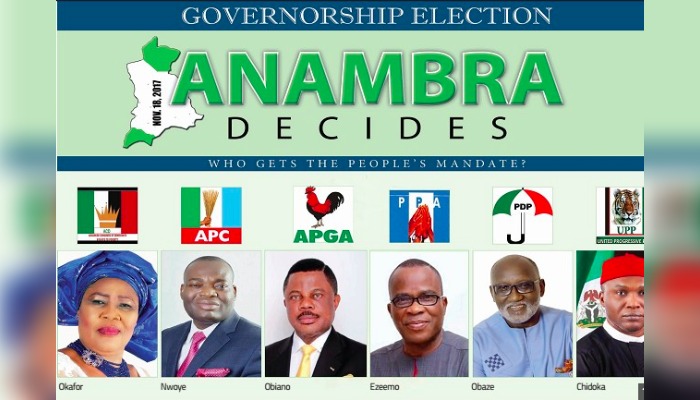 Candidates participating in the November 6 governorship election in Anambra State on Tuesday issued a joint state­ment asking the Federal Gov­ernment to release Nnamdi Kanu, leader of the Indige­nous People of Biafra (IPOB), in order not to avoid acts that may jeopardise the conduct of the election.

It would be recalled that on Sunday, South East Council of Traditional Rulers and repre­sentatives of Igbo Archbishops and Bishops asked the Federal Government to release Kanu, who has been in the custody of the Department of State Ser­vices (DSS) since June to them. They also urged government to de-proscribe IPOB as a terrorist organisation.

While aligning themselves with the position of the mon­archs and bishops, the candi­dates while calling for a vio­lence-free poll also appealed to the Federal Government to demilitarise the South-East zone and stem the heightened tension, skirmishes and end­less bloodletting between the security agents and the youths.

The statement read, “In response to the very grave concerns expressed, and ap­peal made by the South East Council of Traditional Rulers and the Representatives of Igbo Bishops and Archbishops, and in appreciation of the general anxiety arising from recent and continuing violence in the South East geo-political zone of Nigeria, and Anambra State in particular.

“We, the undersigned candi­dates in the forthcoming guber­natorial election in Anambra State, commit to peaceful and violence-free conduct in the run-up to, during and after the election.

“We the candidates in the forthcoming Anambra State governorship election commit unequivocally to non-violence and the maintenance of peace throughout the duration of the election and beyond.

“We urge all our supporters and other stakeholders to com­mit fully to these ideals and refrain from any act that may imperil the election.

“In order to eschew all acts that may torpedo the forthcom­ing election, we urge the Feder­al Government to release Mazi Nnamdi Kanu to the South East Council of Traditional Rulers and the Representatives of Igbo Archbishops and Bishops.

“We urge the Federal Gov­ernment to take urgent steps to demilitarise the South-East zone and stem the heightened tension, skirmishes and end­less bloodletting between the security agencies and our youths.”

While calling on the Inde­pendent National Electoral Commission (INEC), the armed forces, other security agencies and all stakeholders to dis­charge their mandates in accor­dance with law and in a fair and just manner, the candidates also appealed to IPOB members to refrain from conducts that may hinder the successful conduct of the election.

“We assure our youths that we have heard your cries and that we feel your pain. We urge our youths to eschew violence and commit afresh to peace. Consistent with the above, we urge IPOB not to do anything that would hinder or be seen to be hindering the smooth run­ning of the forthcoming gover­norship election in Anambra State and to cancel all scheduled sit-at-home orders, as these have already caused untold hardship for our people.

“We call on the Independent National Electoral Commission (INEC), the armed forces, other security agencies and all stake­holders to discharge their man­dates in accordance with law and in a fair and just manner”.