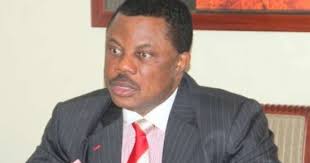 Ahead of the November 6 governorship elections, Anambra State, the All Progressives Grand Alliance, APGA, has constituted a National Campaign Council, NCC, for its governorship candidate Professor Chukwuma Soludo.

The campaign Council would be headed by the Governor of Anambra State, Chief Willie Obiano as Chairman, while the National Chairman of APGA, Dr Victor Oye will serve as Deputy Chairman.

Details of the campaign Council released by the National Publicity Secretary of the party, Barrister TeX Okechukwu, last night showed that the party also named Professor Chukwulobelu as the Director-General, DG, of its State Campaign Council.

Other members of the 9-man APGA State Campaign Council include Hon. Primus Odili, Campaign Secretary, Finance and administration, and Hon. Chinedu Obidigwe, Deputy Director General in charge of Operations, Strategy and Security among others.

To ensure a comprehensive campaign at the grassroots ahead of the election, the party also announced the Constitution and names of Local Government Areas campaign Principal Officers.

Speaking earlier, the National Chairman of APGA, Dr Victor Oye, said the party was going ahead to organise robust campaign machinery to participate in the governorship poll.

He assured that the party will emerge victorious notwithstanding the drama playing out at the INEC with the electoral umpire conspiring with impostors to cause confusion within the party.

Dr Oye was optimistic that the party would get favourable judgment from the competent court of jurisdiction and that the partyâ€™s governorship candidate, Professor Charles Soludo will win at the polls.

It will be recalled that the Independent National Electoral Commission, INEC, on Friday published the list and personal particulars of candidates and their running mates for the November 6 governorship election in Anambra State.

INEC however dropped the candidates of the Peoples Democratic Party, PDP, Mr Valentine Ozigbo, and that of the All Progressives Grand Alliance, APGA, Prof.Chukwuma Soludo.

The commission, instead, named Chukwuma Michael Umeoji as the substantive candidate of APGA.