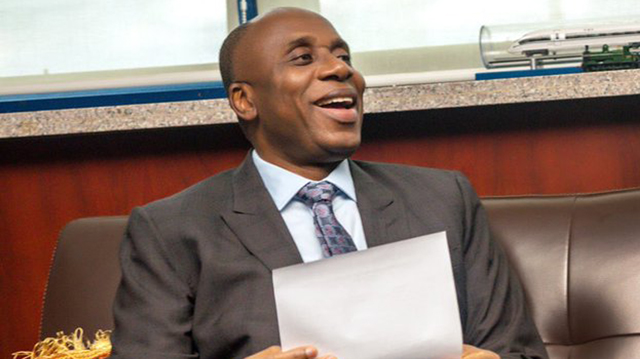 The Editor Nigeria reports the Minister of Transportation, Rotimi Amaechi, yesterday, recommended that stiffer charges be preferred against anyone found to be vandalising rail facilities in the country.

Amaechi made the recommendation during a ministerial briefing organised by the Presidential Media Team at the State House, Abuja.

He opined that introducing stiffer penalties such as manslaughter charges to punish vandals would go a long way to curb the menace, which could cause a train to derail and lead to grave fatalities.

â€œYou can imagine the number of people that will die as a result of that derailment. This is just because one selfish Nigerian is trying to steal track to make money. Iâ€™m not saying that they should be killed because thereâ€™s poverty. But Iâ€™m saying they should be charged for mass manslaughter because people will die. But again, they will tell you that manslaughter means that somebody died.

Amaechi lamented that railway clips were frequently stolen, resulting in huge losses in hard currency. He added: â€œIf we enforce the law on the vandalisation of tracks, it will stop. And I have asked the Managing Director of Nigeria Railway Corporation (NRA) about their police. He said they were enough.

â€œI will meet the Inspector General of Police (IGP) to give us enough men and materials so that we can use them to police the tracks. Having moved from narrow gauge to standard gauge, it has become a national security issue because itâ€™s a daily movement, involving three, four, five, six trips a day. I think the law should deal with those who break it. The law should not be quiet.â€

The minister revealed that Nigeria and China have signed a contract to manufacture train coaches locally in the country following an initial five-year period of just the local assembly of the components.

He hinted that government would not hesitate to look towards European banks for intervention if China was not forthcoming with assistance, adding that a financial firm has already expressed willingness to provide funding for some of the rail projects.

â€œIf the Chinese donâ€™t turn up in the next few months, why shouldnâ€™t we approach the European banks to fund Ibadan to Kano? I will put that before the Minister of Finance.

â€œThe Standard Chattered Bank has agreed to fund Lagosâ€“Calabar; we are negotiating with them. We are negotiating Port Harcourtâ€“Maiduguri. Kanoâ€“Maradi is funded by Pedy-Swiss. We would look for money from everybody,â€ he noted.