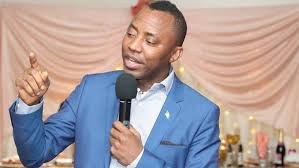 The African Action Congress (AAC) has revalidated the position of Omoyele Sowore, the convener of #RevolutionNow, as its national chairman.

The party at its National Executive Committee (NEC) meeting in Abuja insisted at no point did it suspend or expel its national chair.

A faction of the AAC led by Dr Leonard Nzenwa expelled Sowore from the party for using it as a platform to mobilise for his revolution against the Federal Government and other anti- party activities.

But the party said the continuous recognition and dealings with party usurpers in contravention to the constitution of the AAC by the Independent National Electoral Commission (INEC) is a departure from the Electoral Act.

The party, in a communiquÃ©, demanded the â€œrecognition of Omoyele Sowore as the National Chairman of the African Action Congress and other National Officers who were elected along with Sowore at the Lagos Convention by INEC.

â€œStoppage of efforts to remove State Chairmen of the AAC across the country and a clear memo to this effect should be sent to all Resident Electoral Commissioners (RECS). INEC must stop Its unprincipled and unnecessary meddlesomeness in the partyâ€.

The party also chided the Federal Government for shielding the Minister of Communications and Digital Economy, Isa Pantami, despite his alleged past ties to terrorist organisations.